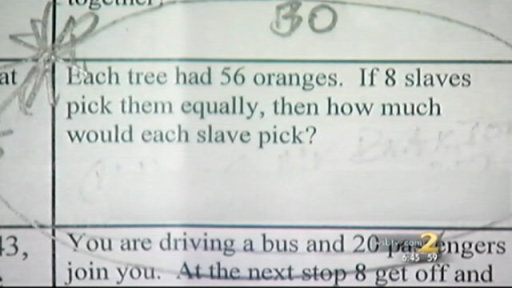 Third graders in in Gwinnett County, Ga., were given math homework Wednesday that asked questions about slavery and beatings.
Christopher Braxton told ABC News affiliate WSB-TV in Atlanta that he couldn't believe the assignment his 8-year-old son brought home from of Beaver Ridge Elementary school in Norcross.
"It kind of blew me away," Braxton said. "Do you see what I see? Do you really see what I see? He's not answering this question."
The question read, "Each tree had 56 oranges. If eight slaves pick them equally, then how much would each slave pick?"
Another math problem read, "If Frederick got two beatings per day, how many beatings did he get in one week?"
Another question asked how many baskets of cotton Frederick filled.
"I was furious at that point," Braxton said.
"This outrages me because it just lets me know that there's still racists," said Stephanie Jones, whose child is a student at the school.
"Something like that shouldn't be imbedded into a kid of the third, fourth, fifth, any grade," parent Terrance Barnett told WSB-TV. "I'm having to explain to my 8-year-old why slavery or slaves or beatings are in a math problem. That hurts."

"In this one, the teachers were trying to do a cross-curricular activity," Gwinnett County school district spokeswoman Sloan Roach said.

Visitors around the Globe

A Proud Member of the Ex-Pat Blog Network