The Story of the Boy and the Dolphin

Pliny the Younger, a lawyer, author, and magistrate of Ancient Rome, is known for his hundreds of surviving letters, which are an invaluable historical source for the period. In the excerpt below, Pliny tells a poignant legend about a boy and dolphin. 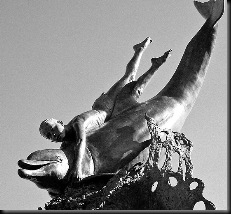 There is in Africa a town called Hippo, situated not far from the seacoast: it stands upon a navigable lake communicating with an estuary in the form of a river, which alternately flows into the lake, or into the ocean, according to the ebb and flow of the tide. People of all ages amuse themselves here with fishing, sailing, and swimming; especially boys, whom love of play brings to the spot. With these it is a fine and manly achievement to be able to swim the farthest; and he that leaves the shore and out-races his companions at the greatest distance gains the victory.

It happened, in one of these trials of skill, that a certain boy, bolder than the rest, launched out towards the opposite shore. He was met by a dolphin, who sometimes swam before him, and sometimes behind him, then played round him, and at last took him upon his back, and set him down, and afterwards took him again; and thus he carried the poor frightened fellow out into the deepest part; when immediately he turns back again to the shore, and lands him among his companions.

The fame of this remarkable accident spread through the town, and crowds of people flocked round the boy (whom they viewed as a kind of prodigy) to ask him questions and hear him relate the story. The next day the shore was thronged with spectators, all attentively watching the ocean, and (what indeed is almost itself an ocean) the lake. Meanwhile the boys swam as usual, and among the rest, the boy I am speaking of went into the lake, but with more caution than before. The dolphin appeared again and came to the boy, who, together with his companions, swam away with the utmost precipitation. 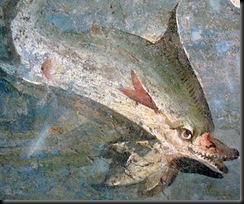 The dolphin, as though to invite and call them back, leaped and dived up and down, in a series of circular movements. This he practiced the next day, the day after, and for several days together, till the people (accustomed from their infancy to the sea) began to be ashamed of their timidity. They ventured, therefore, to advance nearer, playing with him and calling him to them, while he, in return, suffered himself to be touched and stroked. Use rendered them courageous. The boy, in particular, who first made the experiment, swam by the side of him, and leaping upon his back, was carried backwards and forwards in that manner, and thought the dolphin knew him and was fond of him, while he too had grown fond of the dolphin.

There seemed now, indeed, to be no fear on either side, the confidence of the one and tameness of the other mutually increasing; the rest of the boys, in the meanwhile surrounding and encouraging their companion. It is very remarkable that this dolphin was followed by a second, which seemed only as a spectator and attendant on the former; for he did not at all submit to the same familiarities as the first, but only escorted him backwards and forwards, as the boys did their comrade. But what is further surprising, and no less true than what I have already related, is that this dolphin, who thus played with the boys and carried them upon his back, would come upon the shore, dry himself in the sand, and, as soon as he grew warm, roll back into the sea.

It is a fact that Octavius Avitus, deputy governor of the province, actuated by an absurd piece of superstition, poured some ointment 1 over him as he lay on the shore: the novelty and smell of which made him retire into the ocean, and it was not till several days after that he was seen again, when he appeared dull and languid; however, he recovered his strength and continued his usual playful tricks. All the magistrates round flocked hither to view this sight, whose arrival and prolonged stay, was an additional expense, which the slender finances of this little community would ill afford; besides, the quiet and retirement of the place was utterly destroyed. It was thought proper, therefore, to remove the occasion of this concourse, by privately killing the poor dolphin.