Life Magazine: The Strange Case of the Nimer Murders 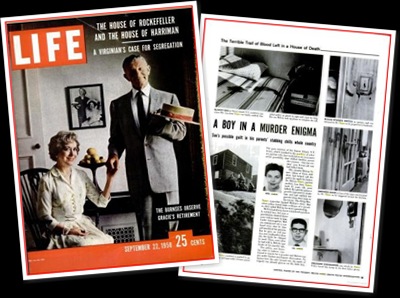 A two-page article in the September 22 1958 issue of LIFE magazine relates the chilling tale of the Nimer murder case. The double homicide of Mr. and Mrs. Melvin Nimer was sensational at the time because the chief suspect in the crime was their eight year old son, Melvin Dean Nimer. 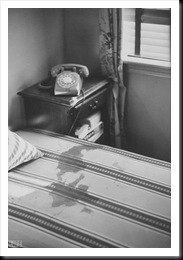 Sometime before two in the morning of September 2, 1958, Melvin Nimer and his wife, Lou Jean Nimer were attacked by an assailant in their Staten Island home. According to their son's initial account,as a masked man attempted to choke him, his parents, rushing to his aid, were stabbed in the struggle. Based on the boy's description, police issued a manhunt for a white male, wearing blue dungarees and a blue print-striped shirt.

From the early hours of the investigation, officers felt that something didn't add up. Given the fact that he had witnessed the violent death of both his parents hour before, his calm behavior seemed unusual.

Suspicion of the boy's guilt was also based on the fact that no easy means of entry was found. According the Frank Donnelly of the Staten Island Advance, "retired police officer Vincent Meli, who, along with his late partner, Officer Harry Tyson, were the first cops on the scene, said the locked exterior screen door at the Nimer home and little Melvin's unnaturally calm demeanor convinced him the boy had killed his parents - despite statements by the youngster and his dying parents to the contrary.'Back then, I knew he did it,' the 77-year-old Dongan Hills resident recently told the Advance. "The door was locked. 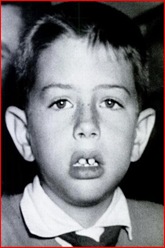 The bad guy didn't lock the door on the way out.'"

Yet, was it really possible for a child to murder both his parents in such a cold-blooded way? He certainly didn't seem like a killer.

Aside from the Dean's account of events, there was physical evidence, which seemed to back up the boy's story. Strips of cloth, matching nothing else found in the house were discovered on the boy's bed and were conceivably to be used as a gags and restraints. Police initially thought the strips of cloth might have come from an old hospital mattress. It was never traced or identified.

Additionally, detectives found a set of footprints at the rear side of the Nimer's home and plaster casts were taken at that time. The following day, patrolmen found a knife in a hedge about 1000 feet from the site. A laboratory analysis revealed traces of blood on the weapon. It was impossible to determine whether the blood residue was animal or human. Despite evidence seeming to corroborate the child's version of events, the detectives remained suspicious.

With Dean's uncle's consent, District Attorney John M. Braisted Jr. sent the boy to the Staten Island Mental Health Center on Friday, September 5, just three days after the deaths of his parents. Under the direction of Dr. Richard Silberstein, doctors examined Dean on Friday and Saturday. After these examinations it was disclosed that Dean had changed his original story and was now confessing to the murders of his parents.

On the day after of his parent's September 9 funereal, New York Journal-American broke the story that the Melvin Dean Nimer was the chief suspect in the murder of his parents. Braisted, instead of refusing to comment, confirmed that the boy was under suspicion. In fact, he stated that preliminary psychiatric examinations had shown the boy to be suffering "from a paranoid type of schizophrenia and the boy's illness and basic personality were compatible to the commission of a violent crime."

With seeming confirmation by the local authorities, press agencies picked up the story and spread it across the nation. Despite the obvious implausibility of an eight year old boy murdering both his parents, despite the lack of blood on the boy's pajamas or a lack of any motive whatsoever, Braisted continued to focus his investigation on Melvin Dean Nimer- effectively trying the child in the court of public opinion.

Into the case swarmed more than 60 New York detectives, who questioned 1,000 people, including patients at the nearby U.S. Public Health Service Hospital, where promising Resident Surgeon Nimer began work two months before. But nothing clicked. No motive appeared; the house was not robbed, and how the prowler entered was unclear. Questioned repeatedly, little Dean told conflicting versions of the sequence of events. Some cops were struck by the boy's unusual intelligence, others by his consistent lack of emotion. ("My mother and father's dead," he told one cop after the tragedy, and rode off on his bike.)

Even at this early stage, some reporters began to question the disturbing direction of the investigation and the motives of the authorities. "Minds seemed more preoccupied with the question of the reflected image than they were with the baffling details of the horrible crime."

In a press conference on September 12th, Braisted was asked by Vincent E. Sorge, a reporter for the New York World-Telegram about an rumored exchange between the dying Mrs. Nimer and a detective. In the exchange, Nimer supported details in her son's description of events and the suspect. At first, Braisted admitted that the dying mother had vindicated the testimony of her son.

However, he then back-tracked."I will make no comment on any published statement attributed to victims of this crime. I am declining comment because I sincerely believe that comment would impede our investigation." Reporters continued to press the district attorney in the following days and finally he admitted that Mr. Nimer had also used to word "prowler" and "mask" prior to dying of his injuries.

On Sept 19th, 1958, the Daily Record writes that reporters pieced together an altogether more probable scenario. Police stated that on June 19th of that year, the owner of the house that the Nimers rented had left a full set of keys at the switchboard of the US Public Health Service (where Nimer and the owner both worked.) The set included the front and rear doors of the house and the overhead and side doors of the garage. The keys were in an envelope with the Dr. Nimer's name written on the front. Police theorized that that copies were made by somebody who may have worked or may have been a patient at the hospital. 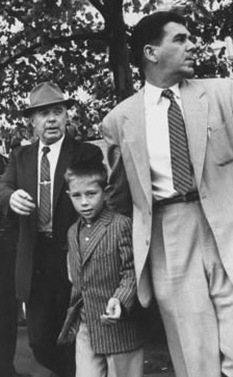 A few weeks later, only after the entire nation had been stunned by the confession of an eight year old "murderer" did Detective James Cox begin to take a more logical view of the case. He discovered that two formal medical reports written by Dr. William Smith, an associate of Dr. Nimer, and another independent physician. These reports which had been written shortly after the murders, established that strangulation marks on the neck of Dean supported the original testimony. The marks could not have been self-inflicted due to their size and position.

Even upon this revelation, officials refused to admit their series of mistakes in the case and publicly maintained that Melvin Dean Nimer remains a possible suspect in an unsolved case.

If you are interested in learning more about this case, you may find more information at the links below. I have also included interviews with the adult Melvin Dean Nimer who discussed his case at length.

Special Thanks to: A view of the Nation: an anthology, 1955-1959 By Henry M. Christman (contains an excellent article about the Nimer murders)