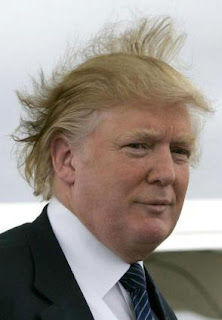 After some very serious deliberation, the executives here are Nomadic View have decided that Mr. Donald Trump, New York tycoon, has one thing and one thing alone that is preventing him from stepping into the presidency. That mop on his head. Other than that- and his personality- nothing stands in his way. (And the fact that he has gone bankrupt a jillion times. )

Anyway, we assigned our wardrobe and makeup department to come up with a few new looks for the Trump.

Here then were our top four.
Posted by Nomad at 3:47 PM